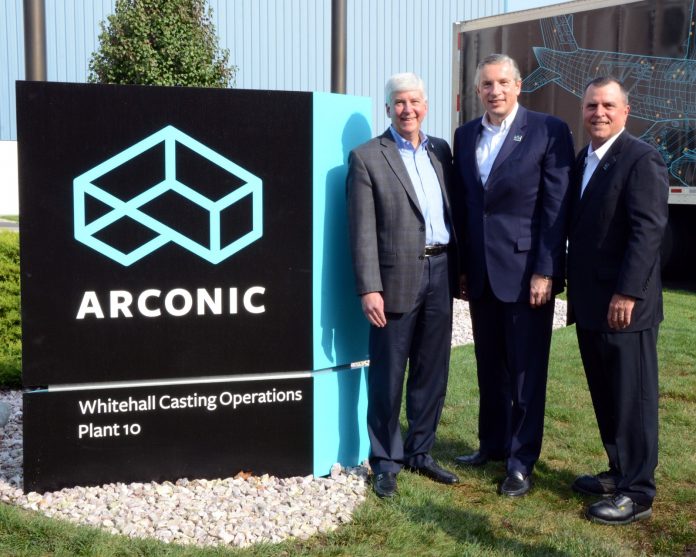 Three companies are expanding around Michigan with support from the Michigan Strategic Fund, the Michigan Economic Development Corp. announced today. Expansions by Arconic, Michigan Metal Coatings, and Diversified Engineering are expected to generate $115.2 million in private investment and create 91 jobs.

“The decision by these companies to expand in Michigan rather than in other states means good jobs for our residents and demonstrates the strength of our state’s manufacturing talent pool,” says Jeff Mason, CEO of the MEDC, the state’s chief marketing and business attraction arm that administers programs and performs due diligence on behalf of the MSF.

“Collaboration with our local partners is key to attracting these kinds of investments and further building the economy around the state,” Mason adds.

Arconic is a global technology, engineering, and advanced manufacturing leader with a presence in Whitehall since 1951 (located north of Muskegon). The company is a market leader in investment casting super-alloy airfoils for aero engines and industrial gas turbines.

Arconic is expanding its operations in Whitehall to meet growing demand from aerospace engine customers. The project is expected to generate a total capital investment of approximately $100 million and create 45 new jobs, resulting in a $495,000 Michigan Business Development Program performance-based grant. Michigan was chosen over competing sites in multiple locations. The city of Whitehall is supporting the project with a 50-percent tax abatement.

Michigan Metal Coatings, headquartered in Port Huron, is an ISO 9001:2015-certified company with an A2LA accredited laboratory, and is a leader in the application of chromium free, corrosion resistant coating systems. The company provides metal finishing services to large automotive OEMs as well as servicing non-automotive industries.

Michigan Metal needs to expand in order to add capacity, and will be purchasing an additional 66,375-square-foot facility near its current operations. The project is expected to generate a total capital investment of $11 million and create 41 jobs, resulting in a $200,000 Michigan Business Development Program performance-based grant. Michigan was chosen over competing sites in Indiana, Kentucky and Ohio for the project. The Economic Development Alliance of St. Clair County plans to offer staff time in support of the project.

Diversified Engineering and Plastics, located in Jackson, is an ISO14001 and IAO/TS16949 certified design and thermoplastic injection molding company primarily serving Tier 2 suppliers to the automotive and heavy truck industries.

The company is seeking to diversify into new markets and plans to add new equipment as well as make improvements to its current facility. The company plans to hire five new employees within the next six months, and another 10 workers in the next two years. MSF is providing $1.4 million in collateral support that will serve as gap financing on the company’s loan from Huntington Bank.