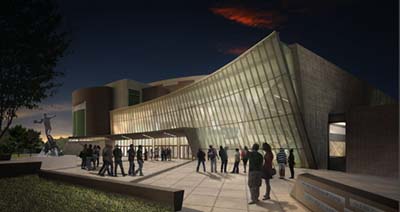 Michigan State University’s board of trustees today approved a $50 million renovation of its Breslin Student Events Center in East Lansing, along with the construction of a Michigan State Basketball Hall of History.

“While the Breslin Center project addresses a number of issues related to the building’s operations, it will greatly enhance the experience for those attending any of its events,” says Mark Hollis, director of MSU athletics.

Hollis says the concession areas and concourses will be expanded and upgraded at the center. The complex will also receive upgrades to passenger and freight elevators, improved exterior entrances and parking lots, and new piping and water connections. 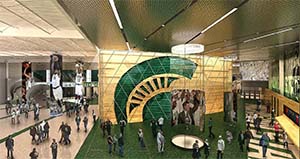 In addition, the university will construct a 26,000-square-foot addition that will house the  school’s Basketball Hall of History. To be located on the southeast side of the Breslin Center, the hall will use technology to highlight the accomplishments of the university’s men’s and women’s basketball programs.

A strength and conditioning center will also be built in the Hall of History, and it will include a locker room for former Michigan State student-athletes who are playing professional basketball. The athletes can use the space to train during the offseason.

“The ability to showcase our university and basketball programs’ history will be one of the key and noticeable features once the project is complete,” Hollis says.

He says $30 million will be provided by the university and $20 million from Michigan State Athletics. Construction is scheduled to begin in January, with the majority of the work expected to be completed in August 2017, with final completion in June 2018. The Breslin Student Events Center first opened in 1989.