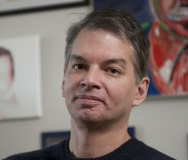 Researchers at Michigan State University are developing robot brains that can navigate mazes, identify and catch falling objects, and work as a group to determine which order they should exit and re-enter a room.

“Previous attempts to design human-like intelligence have failed because we don’t understand how our own brains work,” says Chris Adami, a computational biologist at Michigan State University. “But we know how evolution works and we can speed it up inside of a computer.”

“When our robots are ‘born,’ they will have a brain that has the capacity to learn, but only has instincts. It will take a decade or two of exploration and training for these robots to achieve human-level intelligence, just as is the case with (humans),” Adami says.

The robots work by using genetic algorithms operating on a mathematical framework to model a large population of robot brains working on a particular task — like completing a maze. The most complicated task the robots have completed is walking out of a room and coming back in the same order, or in reverse order.

“This is difficult because the robots have to ID each other,” Adami says. After the genetic algorithm had run its course, the robots seemed to solve the problem by indicating roles to each other with certain motions.

Adami believes forcing the robots to interact with each other is the best path toward self-aware intelligence.

“When robots have to make models of other robots’ brains, they are thinking about thinking,” he says. “We believe this is the onset of consciousness.”