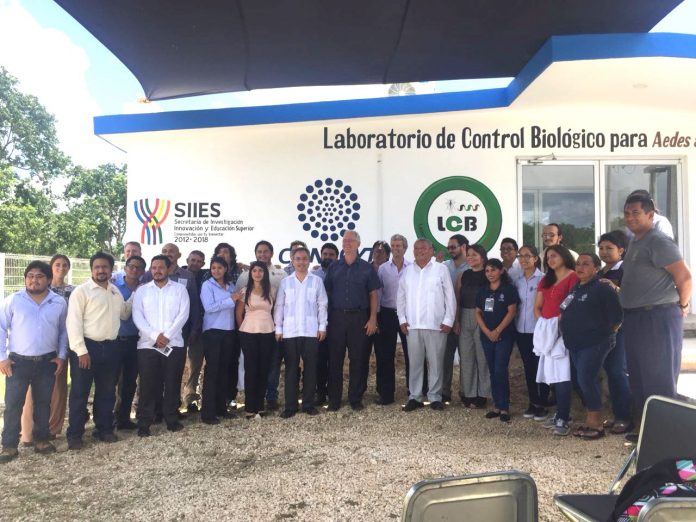 East Lansing’s Michigan State University Wednesday announced it has opened a facility in Mexico that produces millions of male mosquitoes. The work at the facility, which is supported by a $1-million grant from USAID, will use the insects to control the mosquito population.

Zhiyong Xi, a professor in MSU’s Department of Microbiology and Molecular Genetics in the College of Natural Science, breeds millions of male mosquitoes infected with Wolbachia, a bacteria naturally found in many insects, including bees and butterflies.

The disease is not dangerous to humans, but when infected male mosquitoes mate with females, the females become sterile, stopping the viral replication and transmission of diseases such as dengue and Zika.

The mosquito factory opened last month in Yucatan, Mexico. It is part of a collaborative effort between Xi and Pablo Manrique-Saide, a professor at the Autonomous University of Yucatan. The grant was received in 2016 and is part of USAID’s Combating Zika and Future Threats Grand Challenge, which funded 21 projects from 900 submissions. Additional funding for the factory was provided by the government of Yucatan’s Consejo Nacional de Ciencia y Tecnología this year.

The new facility builds on Xi’s work with Sun Yat-sen University in Guangzhou, China, where a similar mosquito factory was established in 2015. The facility in China is the largest of its kind in the world and has the capacity to produce 60 million male Aedes albopictus mosquitoes per week.

The success of Xi’s technology led it to be recommended by the World Health Organization in 2016 for its potential for long-term control of these particular mosquitoes, as well as another type known as Aedes aegypti.

“As the first mosquito factory in Mexico, this facility will allow us to test the technology in different field settings,” says Xi. “We hope that successfully running this factory will result in a novel solution to combat mosquito-transmitted diseases, not just relying on the more traditional approaches, such as chemical insecticides, that are known to be insufficient for disease control.”

An additional building is under construction, expanding the production area so researchers can scale up the mass rearing of mosquitoes and deploy the technology to a broader area in Mexico.

“We want our mosquito factories in China and in Mexico to serve as demonstration centers for those counties in Asia and Latin America, respectively, that are currently seeking new technology for disease control,” says Xi. “It is my wish to develop the Center for Wolbachia Technology at MSU, through a broad international collaboration, to promote translation and deployment of Wolbachia for biocontrol of medically and agriculturally important disease vectors and pest species in general.”