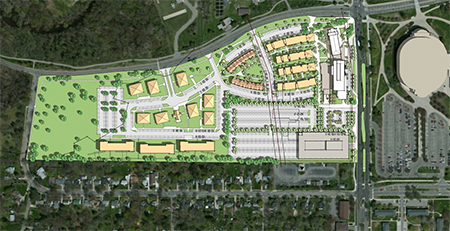 The Michigan State University board of trustees has approved plans to build a $157 million, 11-building housing complex for undergraduate and graduate students, which includes apartments, townhomes, and retail space. The new complex will be located on campus near the Breslin Student Events Center.

“This new project will replace (Spartan Village, which) is geared towards professional graduate students with families,” says Jason Cody, a spokesman for Michigan State. “(It will) also add an additional 244 housing units for individual students.”

In addition, Cody says there are plans to replace Spartan Village with three, four-story buildings with a total of 60 one-bedroom units and 129 two-bedroom units for students with families. Spartan Village, which was built in the late 1950s, has been demolished in part, although some buildings remain in use. New townhomes are also set to be built. The architect on record is Southfield-based Neumann/Smith Architecture, while Seattle-based Encore Architects is doing the housing design.

The new complex will have a fitness room, gardens, a soccer field, a parking lot, and retail space. One of the tenants will be a Starbucks.

Construction is set to begin in the fall, and the apartments are expected to be completed next summer. Rental rates for the apartments will be announced in April