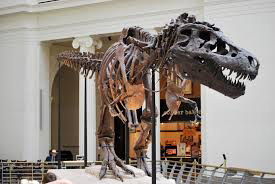 “These new interactive exhibits show kids and adults, in a fun way, that (science, technology, engineering, and math), and the opportunity to invent and discover is always all around them,” says Tonya Matthews, president and CEO of the Michigan Science Center.

At 12-feet high at the hips, “A T. rex Named Sue” will feature a life-sized skeleton cast of the dinosaur  the largest, most complete, and best-preserved T. rex ever discovered. Activities surrounding the main exhibit will include touchable casts of teeth and bones, the ability to look through the eyes of a T. rex and a Triceratops, a 3-D puzzle of Sue’s skeleton, and programming highlighting the discovery of the dinosaur.

“Toytopia” will focus on learning through playing and inventing. At nearly 10,000 square feet, the exhibit will showcase more than 20 hands-on areas, such as: a giant Lego building wall, a giant jack in the box, a retro arcade, a custom-made giant piano, life-sized doll house, and more. The exhibits open Oct. 17.

The museum will also release two new IMAX films — Mysteries of the Unseen World, and Dinosaurs Alive! — later this month.

Using high-speed photography, time-lapse photography, electron microscopy, and nanotechnology, “Mysteries of the Unseen World” explores things that are too slow, fast, or small to see with the naked eye.

Featuring species from the Triassic Period to the Cretaceous, audience members will get to watch paleontologists uncover evidence that the descendants of dinosaurs are still living among us in Dinosaurs Alive!

“We are excited to host playful and inspiring exhibits and films that allow curious minds of all ages to engage in the science of play,” Matthews says.