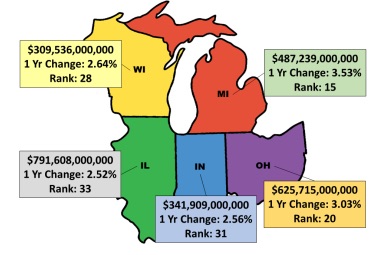 The study compares all aspects of Michigan’s economy nationally using data from 1998 to 2016. Michigan has displayed signs of economic progress since 2012, climbing to 21 from 47.

“This study offers the most detailed and honest assessment of our state’s economy,” says Timothy Nash, senior vice president of strategic and corporate alliances and director of the McNair Center at Northwood University in Midland. “Michigan has led the Great Lakes Region in average GDP growth since the end of the Great Recession (in 2008), ranking sixth nationally.”

This year’s study examined the Michigan and U.S automobile industries, which has contributed to Michigan’s GDP growth and remains the state’s largest economic driver (2017 U.S. auto sales are projected to top 17.5 million units).

Highlights of the report include:

Michigan remains the automotive management capital of the U.S. as well as its design and R&D center. In 2016, the U.S. automobile industry reached an all-time record for automobiles, SUVs and light trucks sold at just over 17.5-million vehicles.

“Michigan’s economy has been on a path of strong recovery and growth,” says Bob Thomas, executive director of the Michigan Chamber Foundation. “We are optimistic that Michigan can become an overall top 15 state by 2020.”

A full version of the report can be read here.