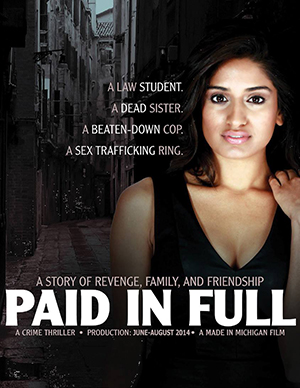 “There isn’t really one way we can raise awareness, so we have to talk about (sex trafficking) all the time,” Shah says. “I hope Paid in Full becomes a film that churches and organizations can do screenings of to talk about this topic. The film is more entertainment, but the documentary contains these stories that can make anyone cry.”

Shah is the executive producer of the upcoming film Paid in Full and the documentary Sold. Shah began working on Paid in Full with the goal of creating a film that viewers could watch to gain insight into the sex trade through a dramatic narrative.

As work began on Paid in Full in 2014, Shah realized that there she had an opportunity to educate the residents on the topic of sex trafficking through a companion piece. From that came the documentary Sold, which tells the tales of several women who escaped sex trafficking in in the state. Shah met with victims who were trafficked at ages as young as 6, or sold into trafficking by their parents.

Shah worked with the FBI, the Michigan State Police, and the Hope Project, a Muskegon-based nonprofit dedicated to supporting survivors of domestic sex trafficking, in the production of the documentary.

Shah hopes to premiere Paid in Full, which stars Shah’s daughter, along with Jonathan Bennett (Mean Girls) and James Russo (Django Unchained), at an event at the Riviera Cinema in Farmington Hills in March or April. She then plans to distribute both films to video-on-demand services to give the films the widest possible audience.