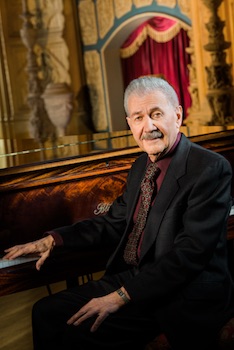 Detroit-based Michigan Opera Theatre will assemble a star-studded cast of opera singers and dancers from around the world to honor the legacy of founder and director David DiChiera on May 19, as he prepares to become artistic director emeritus at the end of the season. The Grand Salute, to be held at the Detroit Opera House, will include a legacy announcement and involve civic and industry giants who have helped DiChiera achieve his vision.

The performance will be followed by a sponsorship dinner at the Detroit Athletic Club and a “Bravo Salute” young patron party at the Detroit Opera House. The festivities coincide with the final weekend of performances of DiChiera’s own opera, “Cyrano,” which concludes the company’s spring season.

“David DiChiera is a visionary, a man of tremendous talent and determination whose passion, business acumen, and charisma created a Detroit opera company when they said it could not be done,” says Wayne Brown, CEO of Michigan Opera Theatre. “We are proud to recognize an industry giant and local hero who has led incredible advancements within both the city of Detroit and the opera world.”

DiChiera founded Michigan Opera Theatre in 1971 with a mission to create a world-class opera company that served and represented the diverse community where it resided. His priorities included championing artists of color, mentoring the next generation of opera singers, and supporting Detroit’s revitalization.

Ticket prices for the May 19 performance range from $59-$150 and can be purchased here. Sponsorship dinner and Bravo Salute ticket information is available by calling (313) 237-5307.