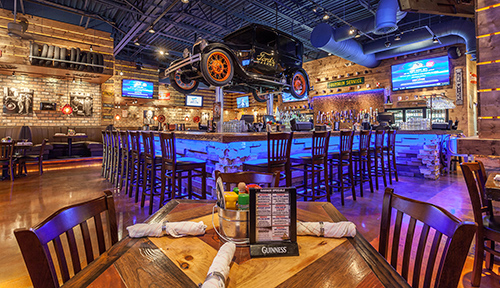 As Ford’s Garage — a popular Florida-based beer and burger joint — looks to expand, metro Detroit may be the site of a future location, says Zak Kearns, vice president of Kearns Restaurant Group, which owns the Ford-themed eatery.

“Michigan is definitely on our radar,” Kearns says. “We’d love to bring (Ford’s Garage) to where it all first happened. The history of Ford and the factory is there, so we’re exploring that.”

Styled like a 1920s service station and prohibition bar, Ford’s Garage is one of three restaurant concepts paying homage to “The Millionaires Club,” which consisted of Henry Ford, Thomas Edison, and Harvey Firestone. The Edison, which Kearns Restaurant Group has since sold, parlayed the restaurant group into opening its first Ford’s Garage location in Fort Myers in 2012, Kearns says.

“So we’re playing off their history as much as we can.”

At Ford’s Garage, the menu includes both a hamburger “Assembly Line” as well as the Burgers of Fame lineup. Each restaurant menu includes 16 different burgers named after the “movers and shakers” of the town in which it resides. “The mayor has one — so does the fire chief, the police chief, the media personalities. It changes every year,” Kearns says.

As far as timing goes, Kearns says the restaurant group will pursue growing Ford’s Garage after it finishes up two other restaurant projects — The Boathouse Tiki Bar & Grill, expected to open next week, and Capone’s Coal Fired Pizza, set to open in early June. “The next markets would probably be in Sarasota, Tampa, or Orlando, but we definitely have an interest in Dearborn — I think the city and the townships surrounding it would be receptive to the history we bring with it,” he says.

SPEAKING OF RESTAURANTS WITH A GARAGE-TYPE FEEL, Tony V’s Tavern recently opened at 5756 Cass Avenue in Midtown. The front of the building is a garage door, which will be rolled up during accommodating weather, says owner John Lulgjura.

Lulgjura says customers can expect to hear live music on weekends in the near future. “This place (formerly Alvin’s Detroit) used to be known for live entertainment. Kid Rock played there once, so did B.B. King. So there’s a lot of history in this building.”

The restaurant is open 11 a.m. to 2 a.m. Monday through Saturday, and management is currently considering its Sunday hours. For more information, visit facebook.com/TVTdetroit or call 313-833-5595.