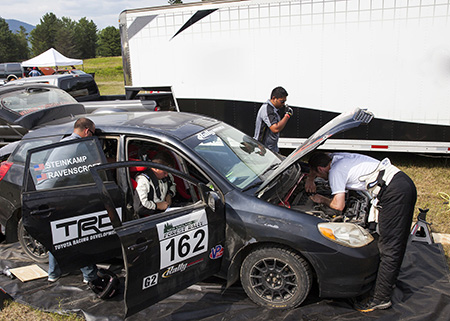 A group of engineers from the Toyota Technical Center in York Township, near Ann Arbor, will compete later this week in the Rally America regional championship series in Missouri as one of only two OEM-comprised teams on the circuit (and the only one from Michigan).

“The rally team is a great example of how Toyota encourages its engineers to collaborate and develop strong relationships across several departments,” says Jeff Makarewicz, vice president of the Toyota Technical Center. “It also provides outreach opportunities to prospective engineers and gives our people the unique opportunity to have a lot of fun while they’re at it.”

As part of the Rally America Championship, competitors and their modified streetcars will take to natural-terrain courses, covering hundreds of miles of gravel, dirt, and snow in more than 30 rally championships across the United States.

This season, the Ann Arbor team will participate in four of those events. Drivers/engineers Kyle Steinkamp and Brian Thurgate will lead the Toyota Technical Center Rally Team, which will make its first stop this year on Friday at the rally in the 100-Acre Wood in Salem, southwest of St. Louis.

“The competition is tough, the courses take their toll on the car, and it’s up to the crew to keep us competitive,” Steinkamp says. “Rally-America has provided a great series and we’re thrilled to be able to not only compete again this season, but to double our entries.”

The news comes on the heels of Toyota President and CEO Akio Toyoda’s recent announcement that the automaker will participate in the World Rally Championship in 2017.â€‹