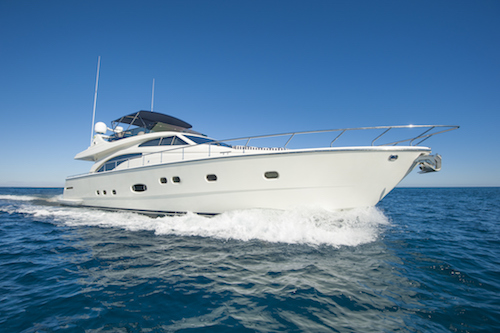 According to data released Wednesday by the National Marine Manufacturers Association, sales of boats, marine products, and accessories totaled $36 billion in 2015 and are projected to top $37 billion in 2016.

Michigan ranked number three nationwide in boat sales for the past year, with $842.5 million is sales, and trailed Florida and Texas, with $2.6 billion and $1.4 billion in sales, respectively. Michigan’s sales of powerboats, engines, trailers, and accessories experienced a 10.5 percent increase from 2014 as well, a trend that is projected to continue across the state and nationwide over the next two years.

“With the U.S. boating industry having one of its strongest years in the last decade, and manufacturers saying, ‘We’re back!’, it’s likely we will reflect on this period as a golden age for our economy and our industry,” says Thom Dammrich, NMMA president. “Economic indicators are working in the industry’s favor — a continuously improving housing market, strong consumer confidence, growing disposable income and consumer spending, and low interest rates all contribute to a healthy recreational boating market. Looking ahead, 2017 is likely to bring new dollar and unit sales gains on par with or better than 2016, and this trend will likely continue through 2018.”

Ellen Hopkins, a representative with the NMMA, adds that boat sales and consumer confidence are closely linked, and with the economic recovery, more families are exploring boating as a means of recreation. Similarly, while a stable economy means more people are financially able to pursue boating, Hopkins also attributes some of the industry’s success to affordability and improved technology.

Other trends for the coming year include a renewed popularity of large boats, with yachts and large cruise boats contributing as a standout area of growth. Intuitive marine technology will also play a key role in the consumer market in 2017 and beyond, with boaters enjoying features such as easier parking and smartphone capability. Boat-sharing and rental apps such as Boatsetter and GetMyBoat are also expected to be a leading factor in the industry, as well.

For those looking to acquire a boat and see the latest product offerings, the Detroit Boat Show is scheduled for February 11-19 at Detroit’s Cobo Center. The show will feature boating seminars, vendors, demonstrations, boats for sale, and activities for kids. More information can be found at detroitboatshow.net.