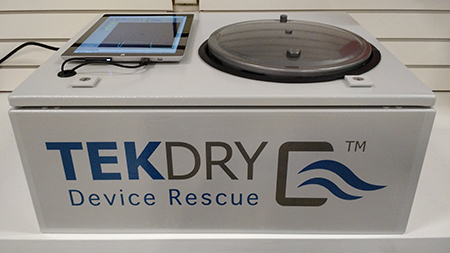 Denver-based TekDry is headed to Play N Trade in St. Clair Shores on Tuesday to install a machine that dries out wet phones and other electronics within 20 minutes. The Macomb County business will be the first location outside of Colorado to offer the service.

“We estimate that 22 million people a year get their phone wet,” says Craig Beinecke, a graduate of Michigan Technological University, who co-founded the startup with Adam Cookson, an alumna of Kettering University, and Eric Jones. “Considering the area’s population, that’s about 21,000 people a month in metro Detroit.”

Pricing for the patented process starts at $70 per smartphone, but only if the device is restored to full device operability with all data and photos intact. Based on internal testing and customer reports, Beinecke says the machine has a 75 to 80 percent success rate, noting that plugging the phone in before using the technology cuts the effectiveness in half.

Beinecke says the technology is most effective within the first 48 hours of getting the phone wet and says the startup considers rice to be its biggest competitor — so much so that, earlier this year, TekDry partnered up with a third-party engineering firm to test the method of placing a wet smartphone in a container of rice to dry it.

“The ‘big gotcha’ is that people who first put their phone in rice for a couple of days assume that it’s dry, but that the battery is dead, so they plug it in,” Beinecke says. “And when they do that, they’re combining water and electricity, which is most likely going to kill the phone.”

The St. Clair Shores store will be the fourth location to offer TekDry’s services, although the company also offers mail-in options as well. “Two of us (co-founders) spent a good chunk of our lives in Michigan, so we’re excited to have the chance to serve our friends and family,” Beinecke says.

He adds that the company is currently in talks with a new strategic partner about adding 11 new machines in stores this January. Whether or not any of the additional locations will be in Michigan is undetermined, he says.