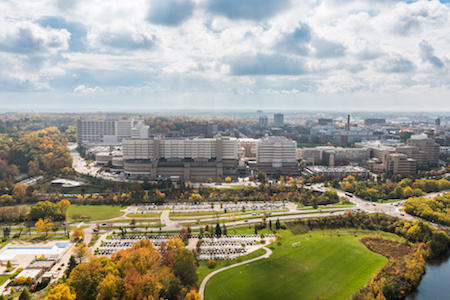 Michigan Medicine in Ann Arbor has opened one of the nation’s first prostate cancer risk clinics for men with predispositions for the disease.

“Even though there are high risk breast cancer clinics all over the country and all over the world, there are, as far as we know, no other clinics like this in the United States focused on prostate cancer risk,” says Dr. Todd Morgan, founder of the new Prostate Cancer Risk Clinic at the University of Michigan. “No one else has turned the corner and said, you know, wait a minute — men really need the same thing that’s already available for women.”

The clinic is for men who have already been tested and identified as having a hereditary mutation that predisposes them to prostate cancer, this might include mutations that are associated with breast or colorectal cancer.

Having a strong family history of breast or ovarian cancer, or close relatives with a genetic predisposition to breast cancer could also be a warning sign to motivate men to be tested for genetic mutations. A recent study found that 12 percent of men with metastatic cancer had genetic mutations, supporting the need for an early detection program in men with these mutations.

Morgan says that prostate cancer diagnosis has been on the decline since the U.S. Preventative Services Task Force advised against PSA screening for healthy men. Since that recommendation was released five years ago, there has been a drop in the diagnosis of both low-risk, indolent prostate cancer and aggressive prostate cancer.

“Typically, patients are going to be recommended to undergo a screening just once a year,” Morgan says. “It will become part of their regular annual health routine. We’re going to make sure we understand their family history. From a preventative care perspective, we’re going to make sure we understand if they’re doing anything that is going to increase their risk of prostate cancer. If they’re smoking, overweight or not exercising, we’ll discuss that with them and provide counseling options.”

Blood and urine tests will be part of the annual screening. If the results indicate that a biopsy is recommended, the 15-minute outpatient procedure can take place in the clinic. If the biopsy suggests prostate cancer, the team at the clinic can help walk patients through management options.