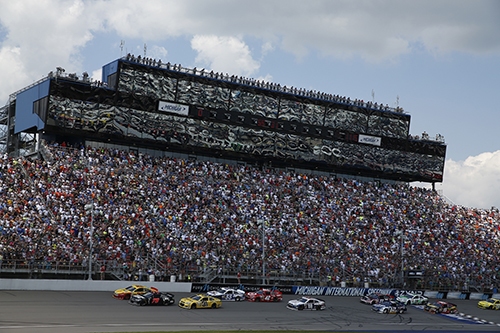 More than 385,000 people visit Michigan International Speedway on an annual basis, generating more than $414 million each year, according to a University of Michigan study released today during the Detroit Regional Chamber’s annual Mackinac Policy Conference on Mackinac Island.

In total, the Irish Hills-based speedway creates nearly $173 million in direct economic activity in Michigan, paying $2.4 million in local property taxes and more than $8.3 million in state sales and use taxes each year.

“Hosting a NASCAR Sprint Cup Series weekend is about so much more than simply hosting a stock car race,” says Roger Curtis, the speedway’s president. “It’s about jobs, tourism, national visibility, economic impact, and a quality of life for Michigan businesses and residents. This racetrack has been a financial shot in the arm for southeast Michigan, including Detroit, since 1968 – and it all takes place on an annual basis.”

The racetrack — which seats more than 72,000 people in its grandstands, with thousands of others in the infield, suites, and campgrounds — is one of only 23 facilities in the world to host the Spring Cup Series. And of those attending NASCAR races at MIS, scheduled for June 13-15 and Aug. 15-17 this year, more than half are from out of state.

“Michigan International Speedway is home to two of the largest sporting events in the state, making multiple contributions to the state and its identity,” says Mark S. Rosentraub, one of the study’s co-authors. “Not only is there a substantial economic benefit and real growth for the state’s economy, but MIS serves as a wonderful ambassador to the state of Michigan through the prestige of having yet another major sport and entertainment event that reaches audiences in many countries.”