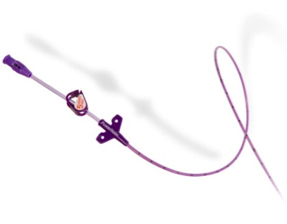 A group of Michigan hospitals are participating in a collaborative quality-improvement effort to improve and standardize how peripherally inserted central catheters (PICCs) are used.

“While PICCs have many benefits and important uses in hospitalized patients, their advantages must be balanced against risks,” says Dr. Vineet Chopra, an assistant professor of internal medicine at the University of Michigan Medical School and who authored a report in JAMA Internal Medicine outlining the need for new guidelines.

Chopra says PICCs have become common in American hospitals in the last decade as the delivery mechanism for chemotherapy for cancer patients, and antibiotics and fluids in intensive care unit patients, among other uses.

Chopra says the researchers looked at records of more than 3,200 patients who received PICCs. They found at some hospitals, 2.5 percent of patients had a PICC placed, while at others it was more than 8 percent. He says the variation between hospitals couldn’t be explained by how sick the patients were, or by whether the hospital was large or small, urban or rural, or affiliated with a medical school.

Chopra says with the publication last fall of MAGIC, an evidence-based guideline for IV device use created by an international panel of health professionals, the variation in PICC use could change.

“MAGIC has the potential to be a game-changer when it comes to IV access,” Chopra says. “Hospitals … have started to consider using components of this tool to improve decision-making when it comes to PICCs. One hospital has already had a substantial drop in short-term PICC use through use of MAGIC.”

The findings use data from the Michigan Hospital Medicine Safety Consortium.â€‹