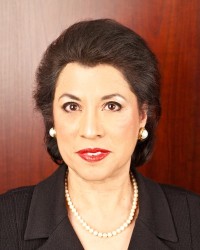 The Michigan Hispanic Chamber of Commerce has appointed Gloria Lara as its new CEO. She replaces Camilo Suero, who stepped down as the chamber’s executive director in August to pursue other opportunities.

“With Hispanic-owned business enterprises being one of the fastest growing business segments in the state of Michigan, increasing by 85 percent from 11,000 in 2007 to nearly 20,000 businesses in 2012, I am focused on helping our members thrive on the state, national, and global business stage,” Lara says. “I am honored and thrilled to have been named the CEO of the Michigan Hispanic Chamber of Commerce.”

As CEO of the Girl Scout Council for nearly six years, Lara served as advocate and chief spokesperson for girl scouting in all sectors of the council’s jurisdiction, including to the general public, the corporate community, and government. She also drove fund development efforts, and contributions and grants grew more than 60 percent during her tenure.

Lara earned a Bachelor of Arts in business administration with a concentration in accounting from California State University in Fullerton, Calif., and a Master of Business Administration from Harvard Business School in Boston.