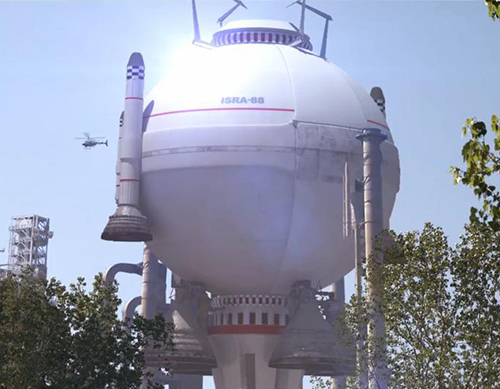 Armed with financing and a recently approved Michigan Film Tax Incentive, Thomas Zellen of Oxford is ready to make a movie. And as the protagonist in ISRA 88 travels to the end of the universe, Zellen will be venturing into new territory himself.

“I don’t think anyone does this (genre) at this budget level,” says Zellen about what he describes as a quirky, dark comedy sci-fi. “It seems like the meat-and-potatoes of this budget realm are the quirky, indie comedies or the B-movie slasher films. But I want to do something that people wouldn’t normally do, so we’re going to take big effects and try to make it look like it’s a $5 million movie. And I think we’ll (be able to do that).”

ISRA 88 — working on a budget of around $625,000  — will follow scientist Abe Anderson after he volunteers for a mission aboard the IRSA 88 to reach the end of the universe. When the ship crashes through its destination, Abe is forced to continuously relive his 13-year mission and must find a way to stop the cycle.

Zellen, who has worked in the film industry for 12 years, plans to begin filming in August, with the goal for a release early next year. In the meantime, the first-time director has been talking with local special effects firms about making a miniature model of the ship. He’s also scouting for studio space.

He adds the film will utilize technology that hasn’t before been readily available to low-budget projects like this. “It’s nothing new in the industry, but it’s something that isn’t widespread. … We’re going to make something that’s only attainable to $100 million movies available to small movies,” he says.

The project, which will film in Romeo and Oxord, is expected to hire about 50  Michigan workers. On Thursday, the Michigan Film Office awarded Zellen an incentive of $110,357 on $392,971 of projected in-state expenditures.

“ISRA 88 will showcase Michigan locations, while harnessing technology that producer Larry Zellen (Thomas’ father) first encountered working in the automotive industry,” says Margaret O’Riley, director of the Michigan Film Office. “This project is also tapping into studio space here in Michigan and is committed to hiring the talent we have here in the state.”