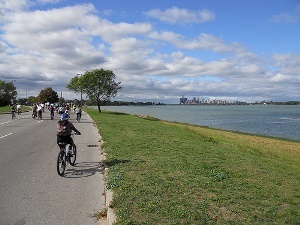 The Michigan Department of Natural Resources will host a public meeting this month to gather input for the development of a master plan for the trail system at the 985-acre Belle Isle Park in the Detroit River near downtown Detroit.

The master plan will help develop a trail system throughout the 200-acre, wet-mesic flatwoods on the east end of the island, develop standards for trail signage, identify gaps in Belle Isle’s existing trail system, and locate a trailhead for the southern terminus of Michigan’s Iron Belle Trail, which runs from the park to Ironwood in the western Upper Peninsula.

The plan also includes the development and expansion of the trail system to include a 6-mile, multi-use, paved trail loop around the perimeter of Belle Isle to better connect existing park facilities and provide safe, nonmotorized recreation opportunities.

“This master plan is critical in developing Belle Isle Park as a regional trail hub, connecting the park to the region’s trail system,” says Amanda Hertl, landscape architect for the DNR. “When combined with the additional amenities on the island, the proposed looped trail around the island with views of the Detroit River and Canada will be a one-of-a-kind experience not found anywhere else in the city of Detroit or surrounding region.”