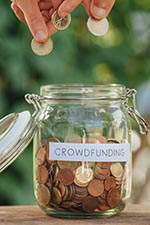 An equity crowdfunding platform — one of the first to accept funding from both accredited and non-accredited investors — will launch later this month at Michiganfunders.com.

“Crowdfunding is not, by itself, new technology,” says David Tessler, a co-founder of the Detroit-based MichiganFunders.com. “But to take crowdfunding and use it as a mechanism through which the 99 percent can participate in the process and make meaningful investments in Michigan-based companies — that is real innovation.”

Once launched, the site will feature a handful of deals, one of which will be the first crowdfunded residential real estate investment in the city of Detroit, says Niles Heron, a co-founder of MichiganFunders.com. Other projects open for financial support through the platform will include a Michigan waste management technology company touting a customizable zero-emission disposal process; a Detroit-based golf club company; a community-oriented restaurant in Corktown; and a mixed-use real-estate development in Pontiac’s Indian Hills district.

The launch of the platform follows the 2013 passing of the Michigan Invests Locally Exemption, or MILE, which allows investors with less than $1 million in net worth to contribute up to $10,000 per business per year. Beforehand, equity crowdfunding investments were restricted to the top 3.6 percent wealthiest Americans, Tessler says.

This new website will allow Michigan-based startups, small businesses, and real estate developers to present investment opportunities to potential investors in Michigan, and raise up to $2 million in capital. Provided a business meets the criteria outlined in MILE, it can make a campaign including a summary of the investment offering, business plan, multimedia assets, and pitch materials such as floor plans and videos.

“The portal will guide both businesses seeking funds and investors seeking opportunities, through every step of the respective solicitation and investment processes,” says Katherine Cockrel, a spokeswoman for MichiganFunders.com.

In recent years, crowdfunding has gained traction with the success of social and philanthropic sites such as Kickstarter and venture capital sites such as AngelList. However, there are still gaps in the system that MichiganFunders.com hope to solve.

“The truth is that, on average, less than 5 percent of new corporations are receiving funding from venture capitalists, banks, and angel investors combined,” says Heron. “That’s an indicator to us that there are simply more ideas in need of funding than there is traditional financing to support. Simultaneously, we see an interest on the part of the ‘crowd’ in terms of supporting and driving those new ideas.

“When aligned properly, we think there’s opportunity to help bridge some of those gaps, both for investors previously restricted, and businesses who can’t grow without capital.”