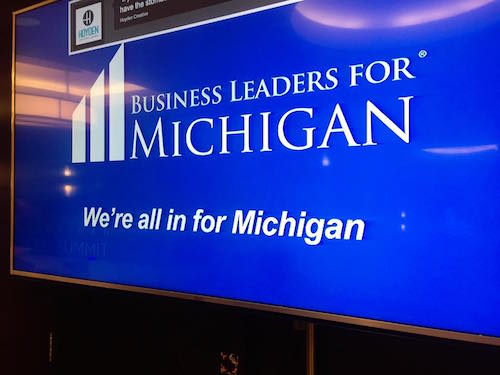 According to data shared Thursday at the fifth annual Michigan CEO Summit, Michigan’s ranking, compared to other states in the U.S., has risen from 48th to 22nd in employment. However, the state still ranks 33rd for personal incomes and 35th for per capita GDP.

More than 400 of Michigan’s senior leaders in business, philanthropy, education, and advocacy gathered at the Westin Book Cadillac in Detroit, located at 1114 Washington Blvd., for the summit, which was hosted by the Business Leaders for Michigan.

Data from the summit showed that in 2015 the state was improving or holding steady in slightly more than half of the 50 plus indicators used to measure the cost of locating to Michigan and the value provided. However, Michigan still ranks in the bottom half of most states on most measures.

“BLM’s data shows Michigan has succeeded in stabilizing the economy, lowering key business costs, and becoming more competitive since 2009,” says Doug Rothwell, president and CEO of Business Leaders for Michigan. “Things are generally getting better, but not fast enough to become a top 10 state at the rate we are progressing.”

Officials with Business Leaders for Michigan say the state has made its biggest gains in boosting cost competitiveness by improving the corporate tax and overall business tax climate. Michigan also ranks high on innovation factors, including 10th in patents, fifth in university R&D, and sixth in exports.

The summit focused on emerging technologies that are disrupting businesses and providing opportunities to differentiate companies from their competitors. Presenters included Patrick Doyle, president and CEO of Domino’s Inc., and William Taylor, co-founder and founding editor of Fast Company.

Business Leaders for Michigan’s members drive 32 percent of the state’s economy, provide nearly 375,000 direct jobs in Michigan, generate over $1 trillion in combined annual revenue, and serve nearly one half of all Michigan public university students.