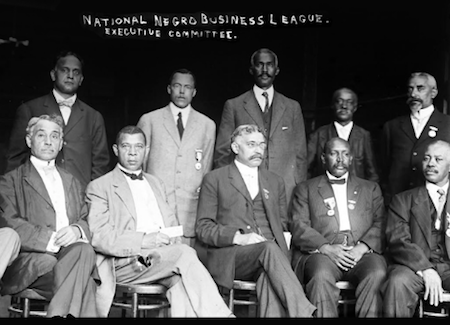 “When you get the chance to stand on the shoulders of Booker T. Washington, it is a privilege and a responsibility,” says Kenneth L. Harris, president and CEO of the National Business League and the Michigan Black Chamber of Commerce. “Detroit is now the center of black businesses in the United States and the world, and we will support diversity, help entrepreneurs create jobs and grow their businesses, and help students learn more about how businesses are run though the National Student Business League.”

Harris adds the National Business League has plenty of room to grow. At one time, the organization was comprised of 600 leagues (chapters) in 34 states. In addition to Detroit serving as the national headquarters at the 1001 Woodward Building just north of Campus Martius Park, the city will serve as a regional Midwest office. It will be joined by regional offices in Washington, D.C. (East), Atlanta (South), and Los Angeles (West).

Collectively, National Business League members employ close to one million people and have a purchasing power of $1.2 trillion. “The great work we have done with forming and growing the Michigan Black Chamber of Commerce will be the national platform for growth going forward,” Harris says. “There are 2.5 million black-owned businesses nationwide, 106,000 in Michigan, and 46,000 in Detroit.”

At a press conference in Campus Martius Park, Harris was joined by Charlie Beckham, co-founder and chairman emeritus of the Michigan Black Chamber of Commerce as well as the city of Detroit’s group executive for neighborhoods. “This is a historical moment in Detroit,” says Beckham. “The city is on the rebound, and we want to make sure we are part of the resurgence.”

Harris says the chamber’s evolution as the National Business League will expand its capacity, scope, and scale. The league will be active on the business and political front, and will assist corporations in working with black-owned businesses by creating a national pipeline for economic opportunities.