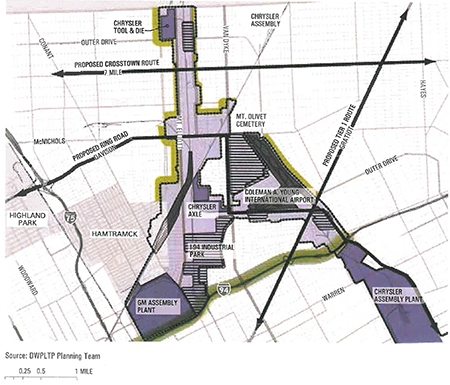 The designation, which will likely include the Mount Elliot Employment District on the city’s east side, connects existing and participating businesses that locate in a given area to real estate and personal property tax abatements, finance plans, and renaissance zones. Up to six areas of the city may be added to the Next Michigan initiative.

“Creating opportunities for additional economic development and investment helps continue Michigan’s growth and comeback,” Snyder says. “Adding the Next Michigan Development Corp. in Detroit will help create jobs and opportunities in the city as it moves forward.”

The Mount Elliot Employment District, which runs from I-94 along Van Dyke and Mount Elliott roads to Eight Mile Road, is home to an estimated 1,700 businesses that employ nearly 15,000 people. It is the city’s largest industrial corridor by employment, and includes the Coleman A. Young International Airport, say officials.

There are five active development corporations that can grant tax incentives to both new and expanding businesses within its borders. They include the Northern Nexus in Grand Traverse County; the West Michigan Economic Partnership in the Grand Rapids region; Port Lansing; VantagePort, which spans across nine jurisdictions in southeast Michigan; and the I-69 Trade Corridor.

In 2013, legislation sponsored by state Sen. Tom Casperson, R-Escanaba, and state Rep. John Kivela, D-Marquette, was approved to allow designation of an additional corporation in the Upper Peninsula. The application to the Michigan Economic Development Corp. for this designation is presently in the early stages.