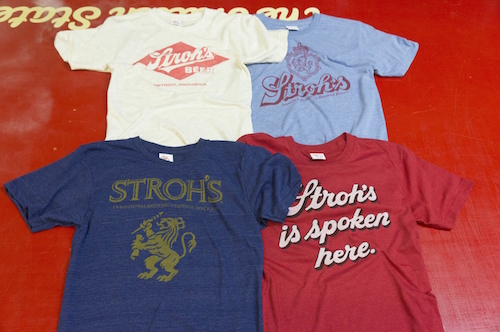 The Mitten State, a Grand Rapids-based apparel company, has partnered with Stroh Brewing Co. to develop a line of vintage T-shirts inspired by the longtime Detroit beer brand.

“Stroh’s was really a staple for many of our fathers and grandfathers,” says Scott Zubrickas, co-owner of The Mitten State. “It’s what they choose to drink, and they did so with pride because it was a premium beer that was made in Michigan. The recipe remains the same, and certainly the Stroh’s brand will forever embody the spirit of determination and craftsmanship that defines Detroit.”

Retailing for $30, the Stroh’s T-shirts are available in unisex sizes in four different colors that feature phrases such as “Stroh’s is spoken here,” as well as the brand’s celebrated lion emblem.

The T-shirts can be purchased online at TheMittenState.com, and at the company’s store, located at 1502 Wealthy St., in Grand Rapids.

Stroh’s, which is owned by Pabst Brewing Co., is one of Michigan’s oldest brands and began operations in Detroit in 1850. Most recently, production of Stroh’s Bohemian-style pilsner was launched at Brew Detroit, a fully automated brewery in Detroit’s Corktown district that also brews beer for Motor City Brewing Works, Atwater Brewery, among others.

IN RELATED NEWS, Grand Rapids-based DonerWorks Ltd., a provider of embedded electronics and software engineering services, has been approved for a $200,000 Michigan Strategic Fund high-tech grant.

Company officials say the grant, which was awarded by The Right Place Inc., a regional economic development organization, will allow DonerWorks to add 25 high-tech jobs at its headquarters, located at 3445 Eastbrook Blvd., and bring $1.3 million in new investment to the city over the next three years.

“The Right Place understood our business and the competitive situation we were in,” says David Dorner, president and CEO of DornerWorks. “Thanks to their efforts, along with their partners, we are able to continue growing in Grand Rapids.”