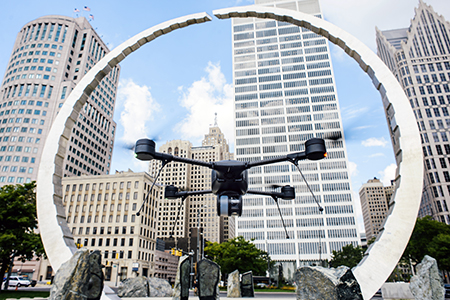 The Michigan Aerospace Manufacturers Association in Sterling Heights, which represents dozens of defense and aerospace firms, is working with the Republic of Ghana to coordinate the establishment of protocols for the use of humanitarian access vehicles, or HAVs, for the delivery of medicine, medical supplies, test samples, results, and related supplies.

The proof of concept with Ghana, a country of 27 million people located on the west coast of Africa, will include HAVs — land, sea, and unmanned aerial vehicles — in support of the United Nations Mission for Ebola Emergency Response in Ghana. Organizations and businesses involved in the early stages of the program include the Gates, Allen, and Albright foundations, Lockheed Martin, and Detroit Aircraft Corp., among others.

“This is an exciting proof of concept that could transform how needed medical supplies are delivered quickly to areas of disease outbreak in Africa, especially in the rainy season when roads can be impassible,” says Gavin Brown, executive director of the Michigan Aerospace Manufacturers Association. “If this is successful, it will be rolled out to other parts of Africa and the world.”

Brown says the trade group refers to unmanned aerial systems, or drones, as HAVs to help mitigate negative connotations of war fighting air vehicles. “Aerial HAVs can literally save lives, are very adaptable, and don’t rely on ground transportation,” Brown says. “What’s more, as medical supplies are flown to the areas of need, blood samples from sick people in the area can be flown back to a central medical lab for testing and follow up treatment.”

Under the proof of concept, the trade group and its members will develop the planning, operations, and sustainment systems for the HAV program in support of the United Nations relief effort. The goal is to speed the delivery of medical drugs to prevent the further spread of an infectious disease.

Currently, Ghana uses small manned aircraft to ferry medical supplies, but the planes have to land on a runway. Following that, ground vehicles complete the trip to a medical center, though washed out roads can hamper the final delivery. Aerial HAVs that offer VTOL capabilities (vertical take off and landing) are much better suitable and more efficient, Brown says.

He adds the trade group and its members can design aerial routes that avoid populated areas using protected communication frequency channels best suited for a given area or region. The routes also can be modified very quickly.

“We are the beginning stages of this proof of concept, and we want to thank the Republic of Ghana for their foresight and compassion,” Brown says. “At every step of the way, we will be very transparent and we will work closely with the government to manage the training of Ghana personnel to operate and maintain the HAVs. Our overall goal is to save lives and mitigate the outbreak of infectious diseases.”