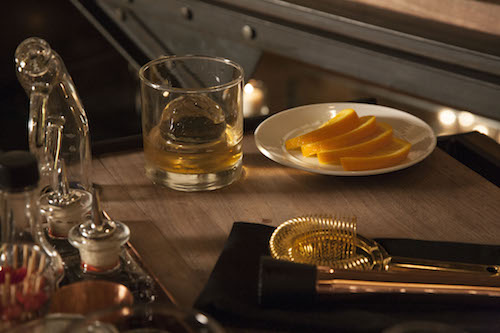 “Every aspect of this new experience has a tie to the city and our guests won’t find it anywhere else in the country,” says Steve Zanella, president and COO of MGM Grand Detroit, located at 1777 Third Ave. He adds the whiskey may be offered in other MGM properties.

Third Street Whisky, distilled just over a mile away from Wolfgang Puck Steak at Two James Spirits in Corktown, 2445 Michigan Ave., is made with locally grown grain and mash.

David Landrum, founder of Two James Spirits, says the whiskey features a unique profile and fig finish that was developed after selecting specific aging barrels made of white oak.

The whiskey will be served straight out of its oak barrel from a tableside cart made from locally sourced materials such as maple and steel.

“The design had to convey handmade artisan elegance, but keep true to a structure that would support the weight of the oak barrels,” says Taru Lahti, the Detroit-based vehicle and interior designer who created both a larger display cart and a smaller, table-sized cart. “For the larger table, the small barrels are set on stands that make them appear as if they are floating in the air.”

Opened in 2012, Wolfgang Puck Steak, which offers a menu of grilled steaks, shellfish, roasted whole fresh fish, and more, is open from 5 p.m. to 10 p.m., daily.