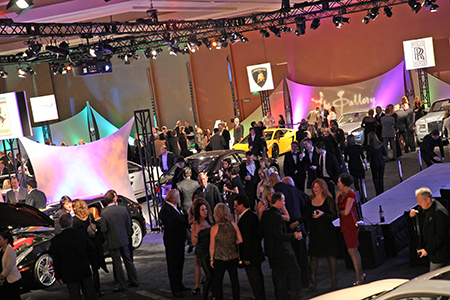 A selection of exotic and luxury vehicles, totaling more than $7 million in value, will be on display starting Saturday in the main ballroom at MGM Grand Detroit as part of The Gallery, the first of several official North American International Auto Show events to be held in Detroit this month.

“There’s not a collection of vehicles like this in one room anywhere else in the world,” says Scott LaRiche, chairman of the 2015 auto show, and vice president of Lou LaRiche Chevrolet in Plymouth.

On Saturday evening, The Gallery — which in previous years has generated more than $10 million in vehicle sales — will feature a strolling dinner inside the cocktail lounge Ignite, located on the second floor of the MGM Grand. Chef Wolfgang Puck and his culinary team are preparing the cuisine.

Following dinner, guests will stroll to the ballroom to view the luxury vehicles as well as an exclusive runway fashion show featuring attire provided by Neiman Marcus.

LaRiche says a portion of the proceeds from the evening on Jan. 10 will benefit Henry Ford Hospital. Tickets are $1,000 per person, $900 of which is tax deductible. Attire is evening chic.

Vehicles scheduled to appear at The Gallery at MGM Grand Detroit include: