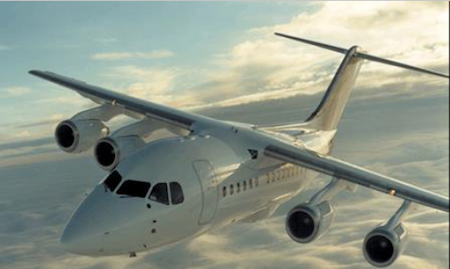 A new airline catering to business travelers and general passengers, called Metropolitan Airways, plans to offer daily service in and out of Coleman A. Young International Airport in Detroit starting in the fall of 2018.

The airline, which is backed in part by the National Bankers Association, a trade organization made up minority and women-owned financial institutions that traces its roots to 1927, and several minority investors, would offer four daily flights between Detroit, St. Louis Mid-American Airport, Houston Hobby International Airport, and Las Vegas McCarran International Airport.

Metropolitan Airways would utilize AVRO RJ-100 aircraft equipped with two specific seating styles: business class elite and business class seating. One-way fares would range from 8 cents to 27 cents per mile, with pricing based on seat class, destination, and time of purchase. Each aircraft can hold up to 128 passengers.

Detroit native Marcus K. Channey, founder, CEO, and chairman of Metropolitan Airways Inc. in Las Vegas, says the plan is to have its base of operations at Detroit City Airport. He says the airline will work closely with the Detroit City Council, the Mayor’s Office, and local community groups to fund public improvements in the surrounding neighborhoods, hire and train local residents, and promote tourism.

“I grew up on the city’s west side, attended elementary and middle school in Detroit, and it has long been a passion of mine to give back to the city, and train and hire local residents for aviation-related positions,” says Channey. “We will give back 2.5 percent of what we earn each year to support educational and redevelopment projects in the area around the airport.”

The company has 16 employees, Channey says. The plan is to have more than 40 management personnel by the time the airline is operational, as well as pilots, flight crews, and ground crews. The airline will offer FAA-approved job training, and work to restore the Davis Aerospace High School at Detroit City Airport as well as support the Detroit Chapter of the Tuskegee Airmen and the Friends of City Airport.

“Detroit is coming back and making strides with the redevelopment of the downtown district, Midtown, Corktown, and other areas,” Channey says. “Plus you have the new Little Caesars Arena (opening in September). We will work with the Detroit City Council to help redevelop the airport and the surrounding area, we will develop local vendor partnerships, we will work with community groups, we will have increased security and safe parking, and we will have a commissary so people could shop before or after a flight.”

Detroit City Council member Scott Benson has been supportive of the airport and plans to add passenger flight services, as has several other council members. Channey says he submitted a proposal in January to Mayor Mike Duggan’s office, and despite numerous phone calls and emails, he has yet to get a return response.

In recent months, the Mayor’s redevelopment team led by Tom Lewand has studied closing Detroit City Airport and replacing it with an industrial park. The plan would upset growing traffic at the airport in recent years, which is utilized by numerous prominent businesspeople including the Ford family, the Nicholson family, Dan Gilbert, Tony Soave, other prominent executives, and sports and entertainment stars like Madonna, Sir Paul McCartney, and Beyoncé.

Over time, Channey says the airline would expand to other destinations, including airports in Canada and Mexico. “We are the first minority-owned airline in the country, and there is nothing I would like to see more than to bring our airline to Detroit, train and hire local residents, and improve the surrounding community.”

A call to Benson and John Roach from the Mayor’s Office were not returned by the time this article was published.