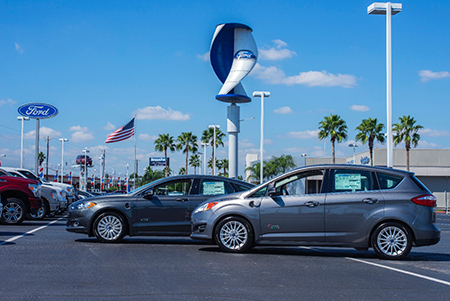 Tom Holzer Ford in Farmington Hills is one of four dealerships nationwide that will use wind energy to power electric vehicle charging stations, lighting, and other facility needs as part of a new pilot program between Ford Motor Co. and Wind Energy Corp.

“This is yet another innovative tool to help Ford and its dealers address a global sustainability challenge,” says John Felice, vice president of Ford’s U.S. marketing, sales, and service.

As part of the program, Wind Energy will invest nearly $750,000 to install wind sail and solar panel systems at the four dealerships, including Dana Ford Lincoln in Staten Island, N.Y.; The Ford Store in Morgan Hill, Calif.; and Fiesta Ford in Indio, Calif.

Participating dealers are electric vehicle-certified and were selected by Ford and Wind Energy Corp. for both their commitment to clean energy and their wind and solar-efficient locations, Felice says.

Installations of the systems are set to begin in early 2015 and be completed by spring. Once installed, the dealerships will keep the systems permanently.