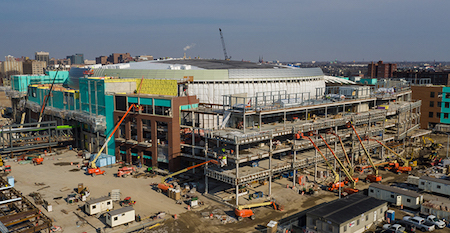 Following the construction of Little Caesars Arena in Detroit and related developments, the Associated General Contractors of America (AGC) today announced metro Detroit added construction jobs at a faster rate than all but six of 358 metro areas nationwide between March 2016 and 2017. The association is currently working with Washington officials to create pro-growth measures that would contribute additional job gains in the future.

“Thanks to new projects like this arena and the related developments nearby, this area is now one of the fastest growing construction job markets in the country,” says Brian Turmail, national spokesman for AGC of America, during a visit to the Little Caesars Arena construction project. “The best way to make sure metro areas like Detroit continue adding new construction jobs is to put in place pro-growth measures that encourage even more developments like this magnificent arena.”

He also says the association expects metro-area construction job opportunities to continue increasing if policymakers can support the tax and regulatory environments, and trade and federal investment programs which will motivate construction companies to pursue new projects.

Little Caesars Arena, located at Woodward Avenue and Henry Street, is scheduled to open in September and will be home to the Detroit Red Wings, Detroit Pistons, and numerous concerts and events.

IN RELATED NEWS, pop singer Janet Jackson today announced her 2017 State of the World tour will include Little Caesars Arena. Jackson will perform on Sunday, Oct. 29 and ticket information can be found here.