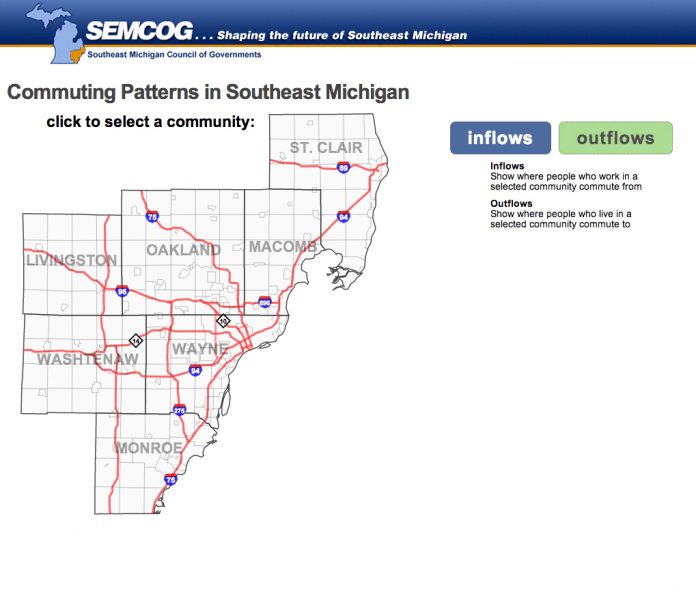 The Southeast Michigan Council of Governments has released an interactive map illustrating the region’s commuting patterns, which community leaders can use to gain a better understanding of their job markets, says Sirisha Uppalapati, a senior data analyst at SEMCOG.

For communities with high outflows, Uppalapati says city leaders may be able to use those numbers as a marketing tool to promote their community. Washington Township, for example, has 10,700 residents who commute outside of the township for work. In comparison, about 6,800 people travel into the township, while about 1,800 people both live and work there.

“It shows that the residents prefer to live there,” Uppalapati says. “Maybe the housing values in (high outflowing communities) are lower than in neighboring communities or maybe they’re more family friendly. It’s not just about jobs. It’s about families and jobs, which I think are equally important.”

The last time such information was available was in 2000, and a lot has transformed since then, Uppalapati says. For instance, commuter trips into Detroit decreased by 19 percent between 2000 and 2010, largely due to a general decrease in working population in the area.

Still, given the data is the latest available, it wouldn’t pick up the influx of more than 15,000 workers into Detroit since 2010, the result of a relocation or expansion of such businesses as Quicken Loans Inc. and more than a dozen related firms, Blue Cross Blue Shield of Michigan, and dozens of smaller firms like Rossetti and Plante Moran.

At the other end of the spectrum, some smaller, residential communities have seen a tremendous increase in commuter inflow. As of 2010, Lyon Township saw 4,752 workers commuting into its boundaries, up 36 percent from 2000.

“Community leaders may need to start rethinking some of their policies,” Uppalapati says. “They are no longer bedroom communities, they are job generators now. So how do they balance that out? Now, with these numbers and maps, communities can assess and shape their residential and commercial development patterns.”