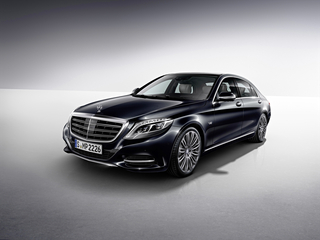 Mercedes-Benz introduced the 2015 Concept S-Class Coupe today at the North American International Auto Show. The German automaker also announced that the new C-Class Series will be built in Tuscaloosa, Ala.

“This is the most beautiful way to start the year,” Daimler CEO Dieter Zetsche says of the concept car. “(It) rethinks common stereotype that passion is not one of Germany’s core competencies.”

Powered by a V8 Biturbo engine, the S-Class produces 449 horsepower and 516 pound-feet of peak torque. It is also equipped with “Intelligent Drive” technology from Mercedes-Benz, which uses cameras to monitor surrounding traffic for the driver.

“The Concept S-Class Coupe combines tradition and emotion, and is a symbol for the embodiment of our design style of sensual clarity,” says Gorden Wagener, vice president of design at Daimler AG. “The perfected design with self-assured style and the highly exclusive appointments make the coupé a true design icon and an expression of modern luxury.”

The automaker also announced that its new C-Class Series, which will be built in Alabama, will help the German automaker to deliver an automobile that exceeds the expectations of the most demanding customers, Zetsche says.

“Mercedes at its best — that’s the new C-Class, which sets new standards for the mid-range segment on many fronts,” says Thomas Weber, member of the board of management of Daimler AG, which is responsible for group research and Mercedes-Benz cars development. “It is characterized by an emotional yet clear design which is continued in the high-quality and modern interior. Its efficient and high-performance engineering provides the basis for a high standard of driving enjoyment.”