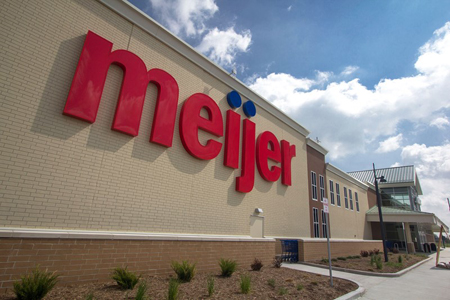 Grand Rapids-based Meijer Inc. will enter the Wisconsin market this year with four new stores and hire more than 1,000 employees, and plans to add two to three new locations in the Badger State in each of the next four years.

The first stores in Grafton and Kenosha will open in June, followed by locations in Oak Creek and Wauwatosa in August.

“Foundations are set, floors are poured, and the walls are up at our four new Wisconsin stores,” says Frank Guglielmi, a spokesman for the company, which operates 213 stores throughout Michigan, Ohio, Indiana, Illinois, and Kentucky.

“By the time we open the Wisconsin stores we will have used 500 miles of wire, 4,000 tons of steel, and 16,000 cubic yards of cement to build the four new stores,” Guglielmi says. “This will result in state-of-the-art stores that are the best our company has to offer.”

Meijer — which offers a food rescue program at each of its stores, — has generated more than $12 million for its food pantry partners throughout the Midwest and began establishing relationships with Milwaukee area food banks before the retailer broke ground on its stores.

“We are very pleased to continue our growth into Wisconsin,” says Chris Hoffmann, director of Meijer’s Milwaukee market. “We are working diligently to put together a great team to help bring the Meijer difference to customers in Milwaukee and the surrounding communities.”

He says the retailer has donated two semi-trucks and trailers to both Hunger Task Force and Feeding America Eastern Wisconsin, along with a total of more than 216,000 pounds of food.