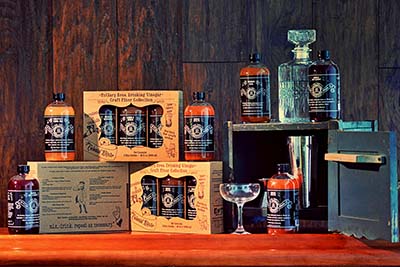 Jess Sanchez McClary, owner of McClary Bros., says the tasting room, to be located at 32621 Grand River Ave., will have the feel of an early American colonial-inspired pub. The décor harks back to when drinking vinegars — often infused with fruit juice, herbs, and spices for use in mixed drinks — first became popular. She says customers can sample flavors including Michigan apple pie, Michigan beet and carrot, Michigan cranberry, pineapple and fennel seed, and lemon and ginger.

She says the new line will benefit Oak Park-based Forgotten Harvest, a nonprofit organization whose mission is to fight food waste and hunger. McClary says her company has worked with the organization’s subsidiary, Hopeful Harvest, since 2014 to manufacture and package its drinking vinegars. Nearly 8 percent of each bottle sold of the Forgotten Flavors line will go to Forgotten Harvest.

“We like to support and promote the importance of local growing and biodiversity,” McClary says. “We also wanted to use this new line of drinking vinegars as an opportunity to give back to Forgotten Harvest because they have been such a tremendous partner in our rapid growth.”

The first flavor in the new line is called Michigan PawPaw, featuring the pawpaw fruit, Michigan’s only native tropical fruit that has a mango/banana/citrus flavor. To bring the flavor to market, McClary Bros. partnered with an Ann Arbor-based farmer who has created an orchard dedicated to growing pawpaw trees.

Michigan PawPaw will be available at the new tasting room during a grand opening event to celebrate the launch of the tasting room from noon to 6 p.m. on Dec. 5.

In September, McClary appeared on ABC’s Shark Tank, but did not receive an investment offer.

McClary Bros., founded in 2012, sells and serves its product in more than 300 bars, restaurants, and retail locations in 17 states. McClary Bros.’s products can be found locally at The Stand Bistro and The Townsend Hotel in Birmingham, Café ML in Bloomfield Township, Westborn Market in Berkley, and Rail & Anchor and Holiday Market in Royal Oak, among other locations.