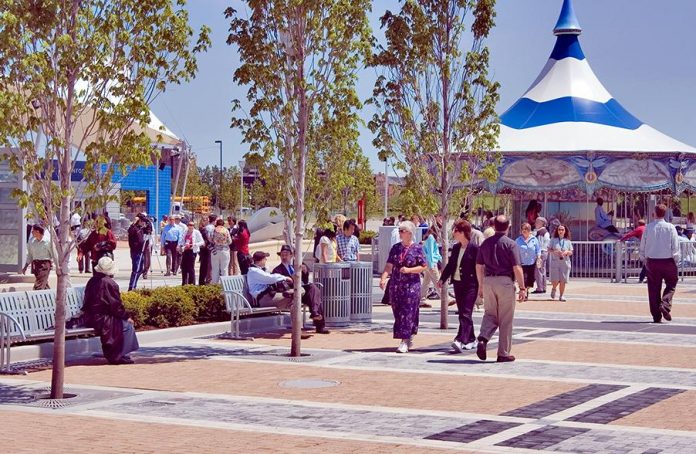 On Thursday, the Detroit RiverFront Conservancy presented its annual Shimmer Award to Matt Cullen, chairman of the conservancy, and his wife, Karen Cullen, at the eighth annual Shimmer on the River.

During the celebration, Rivard Plaza was renamed Cullen Plaza in honor of the Cullens’ grants of $4 million to the conservancy. The grants will support the conservancy’s efforts to revitalize and redevelop 5.5 miles of riverfront in Detroit, stretching just east of the MacArthur Bridge at Belle Isle to the Ambassador Bridge.

“Matt and Karen Cullen have had a profound impact on our entire community,” says Mark Wallace, president and CEO of the Detroit RiverFront Conservancy. “Because of their tremendous vision and their selfless efforts, we now have a beautiful riverfront that welcomes more than three million people from across our community every year and that is a catalyst for billions of dollars of economic development. The conservancy is fundamentally changing the city of Detroit, and we are thrilled to recognize Matt’s ongoing leadership and their tremendous work together in support of our mission by presenting them with the Shimmer Award.”

The Shimmer Award is presented annually during the Shimmer on the River to an individual who has been critical in the success of the conservancy and who demonstrates extraordinary commitment to the revitalization of the Detroit Riverfront. Past awardees include David K. Page, Faye Alexander Nelson, John and Marlene Boll, Peter Karmanos, Senator Carl Levin, and others.

Matt Cullen was the founding chairman of the conservancy and has been a driving force behind the transformation of Detroit’s riverfront since 2003. When he started as chairman, he was a General Motors executive. Today, he is CEO of JACK Entertainment and a principal of Rock Ventures, both in Detroit. He is involved in numerous community organizations.

“Rivard Plaza has held a special place in our hearts since the RiverWalk opened more than a decade ago,” he says.  “It really was the initial gathering spot when the RiverWalk opened and a tangible symbol of what could be a very different future for our riverfront and our city if we worked together. Karen and I and our family have enjoyed many memorable moments there, and we look forward to many more.  We are proud to be able to provide this support to the Detroit RiverFront Conservancy, and we hope that our investment will help continue the momentum of redevelopment from bridge to bridge so that generations to come will be able to enjoy its beauty.”

The continued success of the revitalization depends on the support of donors. The conservancy is the permanent steward of the RiverWalk and the Dequindre Cut, responsible for raising the funds needed for construction, operation, maintenance, security, and programming of the public spaces located along the riverfront.

“Matt and I are honored to receive this year’s Shimmer Award,” says Karen Cullen. “It’s very humbling to be recognized for doing something that you feel so passionately about and that brings so much good to our community.  I’ve always said that the RiverWalk really is our fourth child.”

The Cullen Plaza, which is located at 1340 Atwater Street along the east riverfront, was the first of three RiverWalk plazas to open. Since then, it has become a popular destination in Detroit with a café, sand box, playscape, glass map of the St. Lawrence Seaway, reflecting water features, and colorful landscaping. The Diamond Jack boat tours and Wheelhouse Detroit also operate from Cullen Plaza, and the plaza is also home to the Cullen Family Carousel, which opened more than a decade ago.