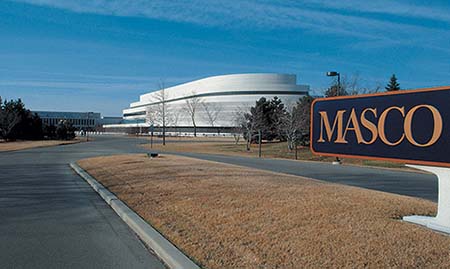 Taylor-based Masco Corp., a designer and manufacturer of branded building products, today announced it will move its headquarters to a new, 75,000 square foot facility in Livonia by the end of next year.

“Over the past several years, we have better aligned our corporate center services with the requirements of our overall business and our individual business units,” says Keith Allman, president and CEO of Masco. “As a result, our corporate office is now too large and segmented for our leaner workforce.”

Allman says the new complex, at West Seven Mile and Haggerty roads and adjacent to Schoolcraft College, will offer more collaborative space. Masco’s current headquarters, built in 1966, has more than 400,000 square feet of office space. He says the Masco R&D center will remain in Taylor.

Masco Corp. designs and manufactures brands such as Behr paint, Delta and Hansgrohe faucets, and KraftMaid cabinets. In June, the company announced its board of directors approved the previously declared spin-off of its installation service, called TopBuild.

Founded in 1929 by Alex Manoogian, the company today has around 32,000 employees. Operating more than 20 companies and nearly 60 manufacturing facilities in the United States (20 in other parts of the world), the company posted net sales of $8.5 billion in 2014.