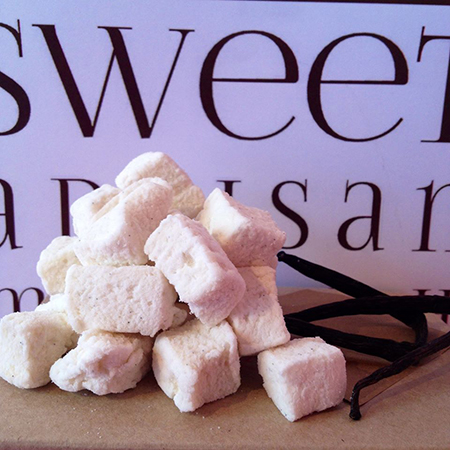 Sweet, a new retail operation devoted almost entirely to the creation and sale of homemade marshmallows, is set to open next week in the Morningside neighborhood on Detroit’s east side.

“It’s an amazing experience (in taste) if you only know commercial-name marshmallows,” says Michele Bezue, owner of Sweet, located in a former Subway restaurant at 15439 Mack Ave., north of Alter Road. “The texture is far lighter and fluffier; they’re less dense and melt in your mouth.”

The difference, Bezue explains, is the fresh ingredients. The vanilla bean flavor is probably the closest thing to what’s available in grocery stores, but considering the amount of vanilla beans that goes into each batch, “it has a far richer taste,” she says.

In time, Bezue — who is working on a line of natural gummy candies and French jellies — hopes to begin hosting a pop-up café featuring ethnic foods with Hawaiian, Filipino, and Puerto Rican ties. Like her marshmallows, the food will be homemade with a “true flavor to it.”

She says she hopes others will see that her business is viable in its location and follow in her footsteps. “Morningside has some amazing opportunities for retail. There are a lot of vacant spaces that just need a lit bit of renovation, and it gives you the opportunity to serve a neighborhood that’s really underserved (in terms of stores).”

The store will officially open on Aug. 30 — National Toasted Marshmallow Day — with available flavors including the basic vanilla bean, Mindo (Michigan bean-to-bar) Chocolate, Peppermint, and Lavender. Other products for sale will include whoopee pies, Rice Krispies Treats, and some of the ingredients used to make the marshmallows, such as simple syrups and brittles.

To learn more about Sweet, which will also host events such as bridal showers, birthday parties, and marshmallow-making classes, visit (sweetconfectionsboutique.com) or call 313-585-5637.