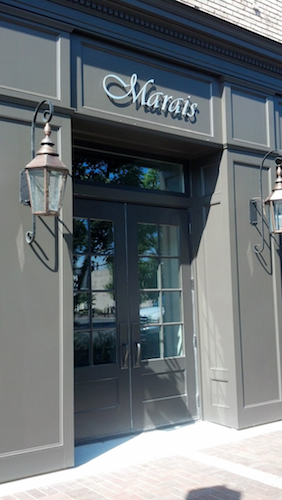 Marais in Grosse Pointe, which opened in late 2013, is the latest restaurant recipient of AAA’s Four Diamond rating for hospitality industry excellence, a distinction for establishments considered to be upscale in all areas.

The H Hotel in Midland, part of the Dolce Hotels and Resorts, also received the award. The hotel offers 130 guestrooms and suites, a fitness center, fine dining facilities, a courtyard, and a garden.

“It’s a great honor,” says David Gilbert, Marais’ co-owner and executive chef. “People are looking to us as a benchmark for fine dining and what it should be.”

David and his wife, Monica Gilbert, opened the establishment — awarded Hour Detroit’s 2014 Restaurant of the Year announced this month — after David served as executive chef for Birmingham’s Townsend Hotel and the Forest Grill, and held a kitchen position at the French Laundry in Napa, Calif.

Marais changes its contemporary French-based menu every four to six weeks and will be revamping its entire menu next week. One of the new items that will be featured on the menu is Scottish langoustine. “They don’t release a lot of it from Europe, so it’s great that we are part of the few to get it,” David says.

Other restaurants to receive this year’s four-diamond rating include:

Hotels in Michigan to receive the distinction this year include: