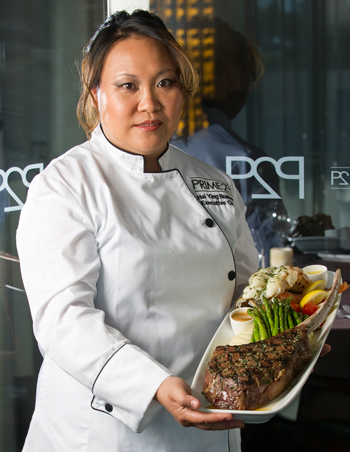 The newest offering at Prime29 Steakhouse in West Bloomfield is definitely one for Adam Richman on the Travel Channel’s Man v. Food.

The dish, the so-called Colossal Surf and Turf, weighs as much as a newborn baby. It includes a three-pound Tomahawk steak, two pounds of lobster tail, and a pound each of mashed potatoes and vegetables. It carries a colossal price tag, too: $240.

Prime29 Executive Chef Hai Ying has cooked up the Paul Bunyan-sized meal about a dozen times since the steak and seafood eatery started offering it about a month ago, says managing partner Stoli Liti. Heads turn and customers whip out cell phones to snap pictures every time, he says.

Most people divvy up the meal with friends, or walk away with a hefty-sized doggy bag. But at least one diner was up to the gastronomic challenge — a male customer who wasn’t exceptionally beefy, but whose height topped 6 feet.

“I didn’t time it, but it was a good half an hour I’d say” for the man to polish off the meal, Liti says. “It’s a pretty big challenge to go through, but it’s definitely worth it.”

Prime29 — the name signifies the eatery’s prime meat that’s dry-aged for 29 days — recently celebrated its one-year anniversary at Maple and Orchard Lake roads. Liti says the restaurant dreamed up the XXL surf and turf dish as a way to get customers excited. “We’re big on quality, and we’re big on taking care of customers,” he says. “We try to do everything big.”

So, if the big dish is so good, has Liti sat down and tucked into it? “I would probably not eat for a couple of days,” he says.

Oh, and about Richman? Prime29 is talking with the producer of Man v. Food about featuring its oversized meal on an upcoming show.