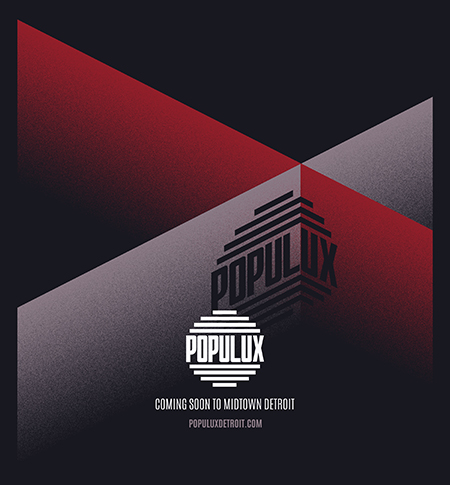 The Magic Stick, a popular music venue on the second floor of the Majestic Complex along Woodward Avenue in Detroit’s Midtown district, is undergoing a major renovation and will reopen April 17 under the name, Populux. The word dates to the 1940s, and melds popular and luxury.

The transformation of the 10,000-square-foot space, which includes a large outdoor deck, will offer patrons a completely new setting — large bars, a stage, a green room, and bathrooms. The Majestic Complex, including a restaurant and a theater, remains open.

“We will bring in national and international DJs, mostly in the Techno space, as well as local musicians and artists to Populux,” says Amir Daiza, a longtime music promoter who got his start in 1981 with Clutch Cargo’s at the Women’s City Club along Park Street in downtown Detroit. “We’re also launching a new label, called Obsession Detroit.”

The label will operate in tandem with Obsessed, a recording studio in northwest Detroit. “We want to develop talent, especially in Detroit and the region,” says Daiza, who recently became a DJ. Known as A Guy Called Amir, Daiza will perform three shows in Miami later this month.

“With the M-1 Rail line (coming to Woodward in late 2016), and all the investments being made downtown and in Midtown, you’re really seeing some dynamic growth,” Daiza says. “We’re all about working with new artists. We worked with such acts as the Red Hot Chili Peppers, Nirvana, Beck, Duran Duran, and the Dead Kennedy’s long before they became well known.”

Daiza will work with Paxahau Events in Detroit to book talent. Paxahau is an event production company that produces the Movement Electronic Music Festival, Detroit Jazz Festival, Detroit Restaurant Week, and books talent for numerous clubs throughout Detroit and around the world.

“Over the past 20 years, I have witnessed first hand the success of Amir Daiza in the Detroit music scene,” says Jason Huvaere, president of Paxahau Events. “He was also a big influence in launching the Movement Electronic Music Festival and has been a great partner on other Paxahau events.”

Daiza, either by himself or with partners, has operated numerous enterprises in the region over the years, including last St. Andrew’s Hall and The Shelter in Detroit, Clutch Cargo’s in Detroit and Pontiac, Industry in Pontiac, 7th House, Smalls, and ELEKTRICITY in Pontiac.

“I have known Amir Daiza for over 25 years since he promoted my first project, Inner City, in Detroit. I have watched him support countless Detroit Techno artists over the years,” says Kevin Saunderson, originator of Techno and House. “Amir is definitely an influencer in regards to the Detroit Techno scene, from the evolution to its current time. He has always had his finger on the pulse of Detroit Techno movements. I am very excited for the new Detroit club opening and looking forward to being involved as much as I can!”

In addition to opening Populux, Daiza in mid-April will release a song, “Rebirth of a City,” with Yos on the Obsession Detroit record label. All proceeds from A Guy Called Amir merchandise will be donated to Bridges for Music, a non-profit charity that will work with aspiring musicians. Obsession Detroit’s release, “Your Love,” recently premiered on Vice magazine’s EDM publication, Thump.