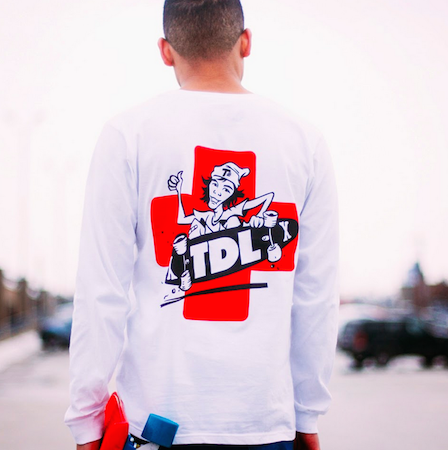 The Dirt Label just released its newest collection last week, and the Royal Oak-based clothing line and retailer says sales have been brisk.

“Based on the last count stock we did, we have about five or six (Rocco Ritchie Collab shirts) left,” says Chris Morris, creative director of the brand, referring to the limited-edition, long-sleeve tee partly designed by 14-year-old Rocco John Ritchie, the son of Madonna and former husband, Guy Ritchie.

Morris, who says he and Rocco are working on several additional collaborative pieces for the brand’s next release in April, first connected with Ritchie after meeting Madonna during her tour of Ponyride, a collaborative workspace for local entrepreneurs in Corktown.

The Dirt Label provided the singer with a selection of tees to pass along to her son, who later posted a photo on Instagram of himself wearing one of the brand’s hats. “Once we saw that, we reached out to Madonna’s assistant and asked if we could send them more products. So we did, and Rocco started wearing them and Instagramming photos of (the clothes).”

From there, the two connected about introducing a collaborative line at the Royal Oak store, and set to work over several phone calls, emails, and sketches. “He’s not a regular 14-year-old kid,” Morris says. “He knows what he wants. He had me do multiple sketches and gave me his 110-percent.”

After the initial release, Morris says the company had received good momentum based on social media posts from both Rocco and The Dirt Label. And then Madonna posted a photo of the tee and a shout-out to Detroit on Instagram.

“The minute that happened, things went crazy,” Morris says. “Our sales went up, our numbers went up.”

In the end, however, it’s Rocco’s audience of more than 120,000 followers on Instagram that Morris is most excited to reach.

“Our brand is about being bold, being daring, (and) leaving a mark,” says Morris, noting that the line’s key demographic consists of high school and college students. “Rocco’s followers are a perfect match. He caters to more of a skater demographic — they’re bold, they’re daring, (and) they stand out.”