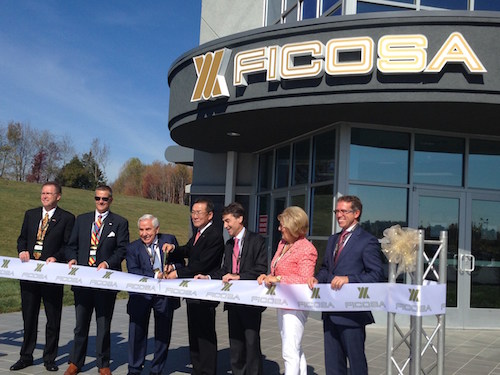 Madison Heights-based Ficosa, a global auto supplier, has opened a new manufacturing facility in Cookeville, Tenn. With an investment of over $50 million, the new plant is equipped with the sector’s latest technology, becoming the most advanced in Ficosa’s global portfolio.

The Cookeville facility, which has a total surface area of 270,000 square feet, is dedicated to producing rear view systems for automotive manufacturers such as Nissan, Ford Motor Co., Volkswagen, Fiat-Chrysler-Automobiles, and General Motors Co.

The plant has an average production capacity of 4.5 million rear view mirrors, and it will add nearly 500 new and advanced manufacturing jobs in the U.S. and Tennessee.

“This new facility is a strategic move that allows the consolidation of key operations and enables a further future growth in one of the largest automobile markets in the world…” says Javier Pujol, CEO of Ficosa.

He says the new facility will also strengthen the company’s business alliance with Panasonic in North America, and that Ficosa is working to align its strategy with Panasonic to accelerate the growth of new technologies it is developing with the company.

In June 2016, Ficosa North America was granted four contracts from two American OEMs to produce 8,900,000 units of rear-view mirrors over a period of five years. Three of the four orders will be produced at the new Cookeville’s plant, with an estimated economic value of $460 million. Production on the contracts is scheduled to start first quarter of 2018.

Ficosa International began operating in the United States in 1995, through a technical-commercial office in Michigan. Since then, the company has expanded its capacities for the development of projects for the North American market, with the creation of a test laboratory, a CAD department, and a prototype laboratory. In 2000, Ficosa North America consolidated its engineering center with a new headquarters in Madison Heights. Ficosa has more than 9,700 employees in 18 countries worldwide in Europe, North and South America, and Asia, and it saw consolidated sales of $1.22 billion in 2015.