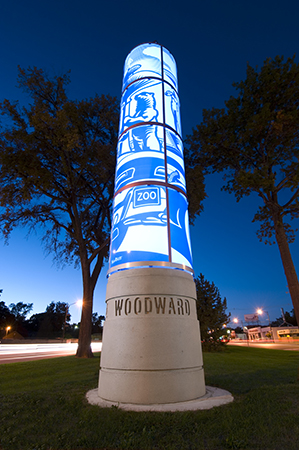 With construction under way on the M-1 Rail line in Detroit, the Woodward Avenue Action Association will launch an app for the public streetcar line by the end of next year to aid in the goal of creating a sense of place along Woodward.

“We envision it being an app with many layers,” says Deborah Schutt, executive director of WA3, which works to enhance and improve Woodward, which runs for 27 miles from the Detroit River north to Pontiac. “Let’s say you we’re getting off a stop of the M-1 and you were trying to locate a particular restaurant, it would help you find it.”

The yet to be named app will also provide tours as well as background information for at least 100 buildings and landmarks that will be outfitted with QR codes. Schutt says she also anticipates the app will incorporate the organization’s Woodward Avenue Tributes program, a series of solar-powered historical markers along the thoroughfare.

Right now, the audio components, which share the story of each tribute, are available on the association’s website. “As we build more of the tributes along Woodward, we would hope to incorporate their audio components into the mobile app as well. These are things we’ll have to figure out as we work with a technical group and an advisory committee as we go forward.”

WA3 recently received a $30,000 grant for the wayfinding and tour app from the Community Foundation for Southeast Michigan. Schutt says the funds will help in the development of the actual app, while the organization seeks partners as well as additional funding to support the installation of signs.

Upon completion in late 2016, the M-1 Rail Streetcar will travel north and south along Woodward Avenue for 3.3-miles between Larned Street and W. Grand Blvd.

IN OTHER WA3 NEWS, the nonprofit is making headway in improving the grounds surrounding the former administration building and executive garage at the Ford Highland Park Plant in Highland Park.

“The Detroit Mower Gang adopted us, bless their hearts,” she says. “ITC Holdings (in Novi) is going to remove 22 trees for us in a couple of months, which will save us a huge chunk of change. And then, just last Tuesday, we received a $65,000 grant from the Wayne County Brownfield Redevelopment Authority, which will allow us to remove debris and clean out the interior and secure the building. We’ve got quite a few things that are happening.”