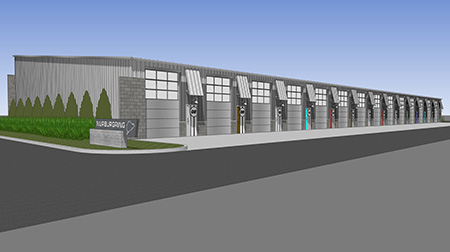 The first phase of 80 garage condominiums at the future M-1 Concourse in Pontiac — an 87-acre mixed-use development that will include a private 1.5-mile test track — have been sold for $14.5 million.

“For the first phase garages, a lot of them were bought by Tier 1 and Tier 2 auto suppliers and car dealers,” says Brad Oleshansky, founder and CEO of the auto-themed development. “We’ve (also) got a lot of interest for the track, (which) will be open to (the auto) industry for testing, training, and marketing purposes.”

He says the development, on the site of a former General Motors factory at the northwest corner of Woodward Avenue and South Boulevard, will feature more than 25,000 square feet of commercial tenants, including an auto-themed restaurant and a walkable village of auto focused businesses.

Oleshansky says Phase 2 of the project, which will include 57 units, will open for sale in the next few weeks. The $60-million project will offer up to 350 oversized garages that can store between two and 50 vehicles.

He says construction on the first 80 garages along with the track is scheduled to break ground in early June and will be open by next spring. The garages and track will be private, but the restaurant and related amenities will be open to the public and include such events as car shows, concerts, and vehicle demonstrations.