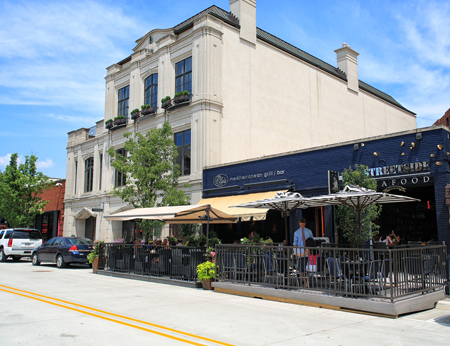 In trendy Birmingham, it seems like a restaurant owner who’s calling it quits barely has time to sweep the floors before a new eatery is ready to take over the space. The phenomenon has onlookers wondering: Could Birmingham become the new Royal Oak or Ferndale as metro Detroit’s ad hoc entertainment cities?

John Heiney, executive director of the Birmingham Principle Shopping District, says retail is still strong in his city’s downtown. He cites the recent opening of LuluLemon, Francesca’s Collection, and the Paper Source as examples.

But the city’s bistro licenses, which have allowed two new Class C liquor licensed, “smaller footprint” restaurants to open each year since 2007, have spawned a rush of eateries. “We think the bistro license has really worked,” Heiney says.

Bistro Joe’s opened on the second floor of Papa Joe’s market in the summer, and Market is expected to open on North Old Woodward in the next few months. Joining them are The Stand in the former Zazio’s space, scheduled for a ribbon cutting next week; Rojo Mexican Bistro in the former Max & Erma’s space, whose owners have applied for a special land use permit; Home, a new restaurant proposed for the previous South nightclub space; Succo Fresco Café, for breakfast and lunch only; and Crush Birmingham, which is yet to be built.

“We still really feel that there needs to be a strong retail presence,” Heiney says. His job includes identifying and courting new retail for the city’s downtown, something shoppers say they want.

Either way, downtown Birmingham occupancy is nearly full. Its more than 350 establishments equate to an enviable 97-percent first-floor occupancy rate. Heiney, whose department has been tracking occupancy downtown for 12 years, says the lowest rate came in the early 2000s after the Jacobson’s store closed, when the rate fell to 89 percent.

“Department stores in downtown,” Heiney says. “We’re not going to see that again.”

Birmingham isn’t the only city in Oakland County with new restaurants. In Troy, the Epicurean Group is moving Northern Lakes Seafood from Bloomfield Hills to the former Charley’s Crab location at I-75 and Crooks, along with the 2,000-square-foot Epic Café, a deli-style eatery, that will be located inside an as-yet unnamed hotel to be built at 5500 Crooks Road.