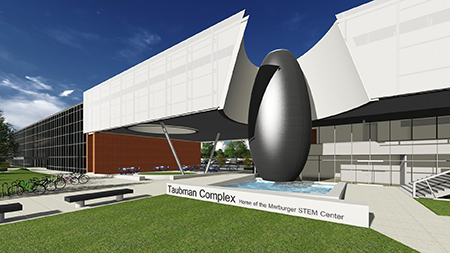 The 34,000-square-foot, three-story structure is the first phase in the construction of the 125,000-square-foot Taubman Complex, which will be designed to create a collaborative learning environment between LTU’s engineering; arts and sciences; and architecture and design colleges, says LTU architect Joseph Veryser.

The first phase, which will be connected to the school’s science and engineering buildings at the southeast corner of the campus quad, is expected to be completed by fall 2016.  It will also house the new Marburger STEM Center named in honor of LTU President Emeritus Richard Marburger.

The academic center will be dedicated to teaching science, technology, engineering, and mathematics, also known as the STEM disciplines. In this case, the acronym STEM also stands for systems, technology, and educational mentoring, say university officials.

The design architect is Thomas Mayne of California-based Morphosis, the architect is Detroit-based Albert Kahn Family of Cos., and the general contractor is DeMaria Building Co. in Detroit.

The new complex will be named for former LTU student A. Alfred Taubman, who donated $1 million to cover planning for the new building and offered a $10 million challenge grant that has now been matched by more than $20 million in new pledges and cash for the construction of the building.