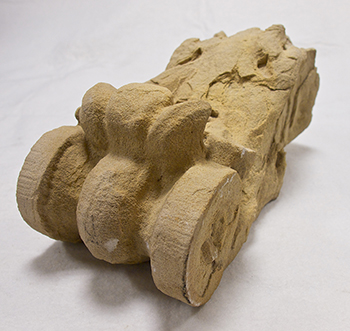 Michiganians will get a chance to acquire a piece of the state’s history through a lottery set up by the Michigan State Capitol Commission to sell 100 historic sandstone modillions removed from the Capitol during its recent exterior restoration.

“This is really the first time we’ve put up for lottery pieces of the building,” says John Truscott, vice-chair of the Michigan State Capitol Commission. “In the past, when they’ve restored the House or Senate chambers, or they would put new carpet down, they would sell off or give legislators the first option for a square of that carpet…. but we’ve never really taken pieces off the outside of the building before.”

Truscott says 100 modillions (horizontal brackets located under a cornice or other building projection) will be sold for $100 to 100 lottery winners. The modillions are decorated with acanthus leaves, a Mediterranean plant often featured in classical art and architecture. He says the brackets are original to the Capitol, which was constructed between 1872 and 1878. The pieces are hand-carved sandstone from Amherst, Ohio.

“There were about 200 modillions that we took off the building and replaced,” Truscott says. “About 100 of them are still in good enough shape that we thought they would make a pretty interesting piece of memorabilia. We wanted to make it available at a relatively low cost so that it’s accessible to people.”

The modillions weigh about 25 to 40 pounds, are 15 inches long, and about seven to nine inches wide.