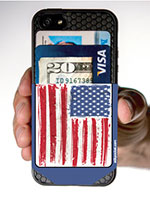 Stik Pocket — a Detroit-based smartphone accessories company — has created a vinyl pocket that wraps around smartphone cases and can hold identification, credit cards, money, and other items.

Owner Brain Owen says he was inspired to create the product after he found himself dissatisfied with similar, more expensive products on the market.

“I had purchased a leather phone case and it had a pocket on it for credit cards and ID but it broke within three months,” Owen says. “I wasn’t going to replace it, so I ripped the leather off and it left a hard plastic phone case underneath. I had liked the convenience of carrying my cards with me, so I put some duct tape on it and made a pocket.”

The products, which come in a variety of designs, including those that feature the 313 area code and M-1 (Woodward Avenue) signage, are currently sold in 200 stores throughout metro Detroit, Ohio, Illinois, and Indiana. He has plans to add nearly 250 additional retailers across Michigan and in surrounding states by October.

In addition to its standard retail offerings, the company also offers fundraising and promotional lines, which may be customized to suit the needs of organizations.

Owens says the stickers are produced at a manufacturer in Kansas, though operations, including packaging services, are based in downtown Detroit near the Renaissance Center.

He plans to offer the product for sale among online retailers such as Amazon within the next six months. “Our goal is to be in every convenience store in America. Getting there is the challenge.”

For more information about the vinyl wrapper, which fits on most standard plastic cases for iPhone 5 and 4 and Samsung Galaxy III and II, visit stikpocket.com.