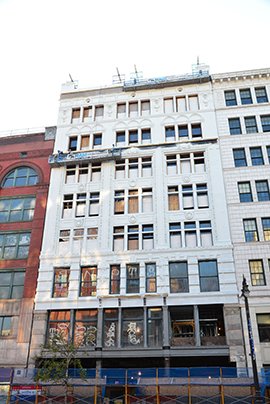 The Lofts of Merchant Row, a luxury apartment complex in downtown Detroit, today announced details about its $10 million renovation of an adjoining historic structure scheduled to open in June and offer studio apartments, along with one- and two-bedroom units featuring hardwood floors and granite countertops.

“We’ve been involved in the revitalization of the lower Woodward corridor since 2003 with the first phase of Lofts of Merchants Row and this (historic structure) is an extension of that movement,” says Jeffrey Schostak, vice president and director of development at Schostak Brothers and Co. Inc. in Livonia. “The expansion is not only helping to restore a historic building but also meeting the high demand of people wanting to live in the city. We are currently 52 percent pre-leased with first occupancy in the newest phase expected on or about June 1, 2016.”

Schostak says the apartments, located at 1413 Woodward Ave. (between W. Grand River and Clifford), include a combination of 630-square-foot studios; 780- to 950-square-foot one-bedroom units; and 1,000-square-foot two-bedroom, two-bath units for a total of 42 units.

The exterior shell of the former Pepper Shoe Building, also known as the Valpey Building, underwent façade repairs and received new white paint. The building was combined at the north end with another Lofts of Merchants Row building at 1437 Woodward.

Detroit-based Sachse Construction is the general contractor on the project and Detroit-based Kraemer Design Group is the architect.â€‹