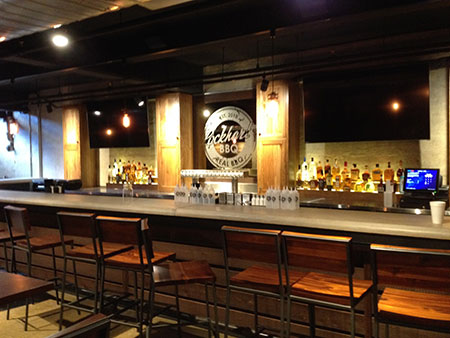 Lockhart’s BBQ is growing. The seating capacity in its downtown Royal Oak location has nearly doubled and the owners plan to open a second location in Lake Orion next summer.

Following a $600,000 renovation of the building’s lower level at the southeast corner of Third and Williams streets, the additional space — which seats approximately 95 people — is expected to open by the end of the month, pending city approval, says Drew Ciora, who co-owns Lockhart’s BBQ and also the Detroit Beer Co. in downtown Detroit with Rick Ghersi.

“Unfortunately, we have a long wait on the weekends, so we wanted to increase our dining capacity,” Ciora says,who also is the sole owner of the Royal Oak Brewery. “We also wanted to create an area we could rent out for private parties.”

Lockhart’s first opened in 2010 in the former Detroit Edison building and features a southern-inspired BBQ menu based off of fare sampled in Memphis, Kansas City, and Austin. Customer favorites include beef brisket, pork shoulder, and ribs, Ciora says.

The lower level builds upon the first floor with Edison-inspired light bulbs and two bars (in case the space needs to be divided during an event). In addition, the wood doors used for the bathroom entrances and divider walls, were reclaimed from Detroit and restored.

Ciora says the restaurant has already taken reservations for about a dozen private parties and plans to hire an additional 13 to 15 employees to support the seating increase.

“We cut a huge hole in the floor to create a nice grand staircase down there,” Ciora says. “We wanted it to feel like it was part of the first floor.”

With the renovations of the lower space, which was largely vacant prior to Lockhart’s takeover, comes an expanded Michigan craft beer selection, Ciora adds. “We have 16 taps that are dedicated to that full time. We carry almost everything made in Michigan.”

Regarding the Lake Orion location, Ciora says the business plans to purchase the building in next 45 to 60 days. “I’m hoping to open in the summer of 2015.”